It's hard to only see the beauty in a garden once you've started gardening in earnest. 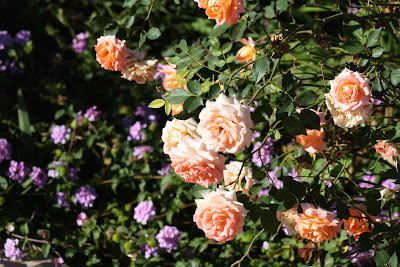 There are a lot of things you begin to see that aren't necessarily beautiful.  And if you're gardening in earnest, you see them on an almost daily basis.

But there was something I saw this week that I've never seen before.  And it was kinda spooky!

Now, spiders generally don't bother me.  I know they can be good.  I don't mind them.  Unless they've put their web across my path, causing me to walk right into it.  I don't think webs have a mind of their own, but for some reason, webs always get tangled around my face and in my hair.  Always.

This, however, was a puzzle.  I wondered what the other stuff was.  It wasn't just a regular spiderweb.  And being arms length, I couldn't see it very well.  So, I did the logical thing.  I bent down closer.

My face was just inches away.  Then I suddenly realized what it was.

Spiders!  LOTS and LOTS of baby spiders!  Tiny, miniature spiders just starting to hatch out, wriggling around on their eight tiny legs, crawling around the leaves of the rose. 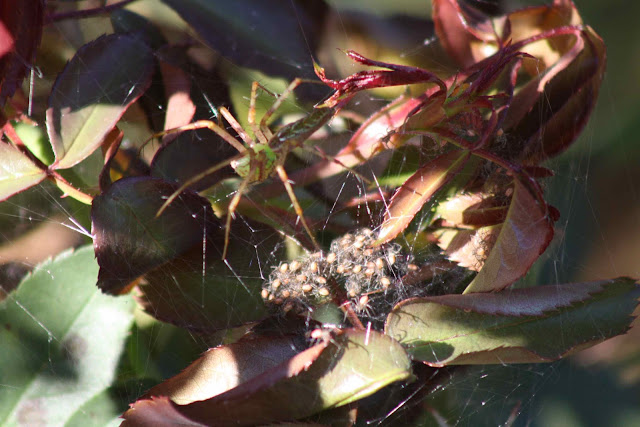 The mother spider was protecting her babies.  She was ready to do battle with me.

I had jumped away just in time, with a jumbled mix of awe, disgust, shock and fright.  I was spooked!

Then, briefly, a feeling of paternal bonding swept over me.  It was very, very brief.  Yet, I couldn't bring myself to do anything to the mother or her numerous babies.  It was spooky, yes, but not necessarily bad.

Still I wonder: Do I really need that many spiders in my garden?
Posted by HolleyGarden at 6:47 AM