My family has learned.  Anytime I start a sentence with a drawn-out "Well...", well, they know it's going to be a long explanation before (if ever) the question gets answered.

So, basically, the answer to the question was:

The explanation I gave before the answer of "I don't know" was this:

I've never seen peonies in Texas, so that's not a good sign.  However, I've heard that peonies can be grown in Texas - with a few provisions.  I was told that if the peony didn't go dormant, you might have to pull the leaves off of it in the fall.  And, of course, it also depends where in Texas you want to grow peonies.  Northern Texans will probably be successful, south Texans may not.  Texas just don't get the chill hours that a lot of plants need.  Plus, there are some varieties that are supposedly more successful here than others.  They take several years to bloom.  So, if you want to grow them for their foliage only, you might not be as disappointed than if you expect a lot of blooms.

That's why my answer was "I don't know".

I'm growing some in my garden right now, just to see.  And, so far, I didn't have to pull their leaves off!  That's a good sign.  They went dormant on their own.  And now, their beautiful red stems are reaching up, as if in a victory stance. 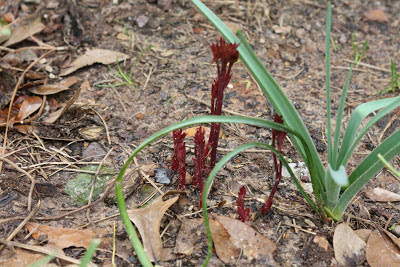 Shirley at Shirls Gardenwatch is hosting a Garden Blog Prequel, where she asks the question: How has your garden changed since you became a blogger?  And my answer would have to be: I'm experimenting more.

I see beautiful photos of so many plants in other blogger's gardens.  Some of these plants I never would have known about if I hadn't begun blogging.

I've ordered snowdrops, edgeworthia, cimicifuga (my first one died, so I'm trying again), witch hazel, hakone grass, mountain laurels, and Virginia bluebells to try out in my garden.  This is a list of plants I've ordered just this year!  That doesn't include all the other plants I'm already trying out in my garden.

I would have never added any of these plants to my garden if I had not started blogging.  My garden would have been full of plants that were easy - roses, boxwoods, and crape myrtles.  It would have been pretty, but not as much fun.

Those words may scare off some gardeners.  But I love those I-don't-know type of plants.  They may not always be successful (like the lilacs I tried), but then again, they just might!

And some day I just may have peony blooms to show off because of it!
Posted by HolleyGarden at 3:49 PM