I realized I didn't know much about Australia, except from what I've gleamed from the 'Crocodile Dundee' movies and Outback Steakhouse restaurants.  Which meant, I only knew that they like to call friends "mate", and that the grill is called "the barbie".

But I know that the canna 'Australia' is a stunner in my summer garden. 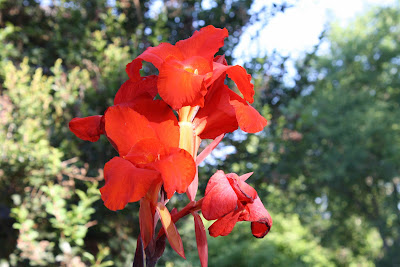 The leaves are dark, almost black.  Gorgeous when the sun shines through them.

The flower is a bright red-orange.  It really shines.  You won't overlook it, even though the flowers rise up on a stalk almost 8 ft tall!  Even before it flowers, this canna is a bold 6 ft tall. 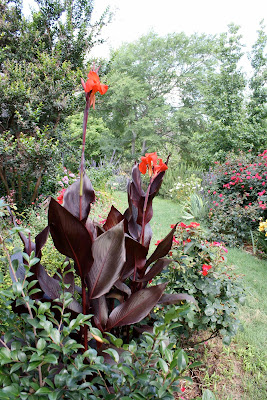 Canna 'Australia' loves full sun and is hardy in zones 7 through 11.  It can be used as a marginal planting in a pond. Wouldn't that be a beautiful sight? Cannas are native to North and South America, not Australia.

But it made me wonder about Australia (the country) anyway. 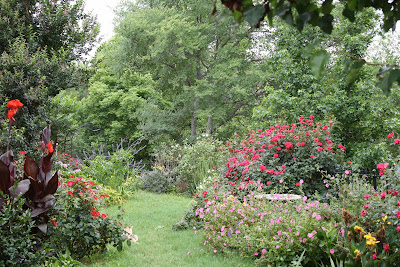 Did you know that there is a town in Australia named Canna?  In 2006 it had a population of 81.

The island of Tasmania is a part of Australia.  The Tasmanian devil is the world's largest carnivorous marsupial.  Other famous marsupials of Australia are the kangaroo and the koala.

Koalas have fingerprints that are similar to a human's!  They also have brains that have shrunken to taking up only about 60% of its cranial cavity (the rest is filled with fluid).

The national gemstone of Australia is the opal.  Although more than 90% of the world's opals are produced in Australia, opals are found in numerous other countries, and NASA says they are even found on Mars! 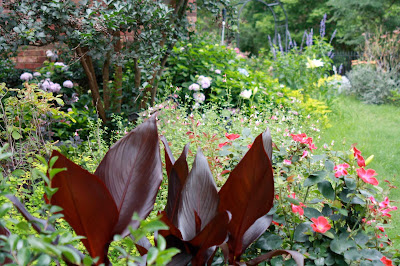 So, Australia is wonderfully unique.  Just like the canna 'Australia'.


And in case you're wondering the facts on Australia all came from Wikipedia, not from a movie or a restaurant.

Posted by HolleyGarden at 8:23 AM