I've been working on my Fall To-Do list.  And I've been doing some tweaking.  One area in particular has been giving my imagination a work out. 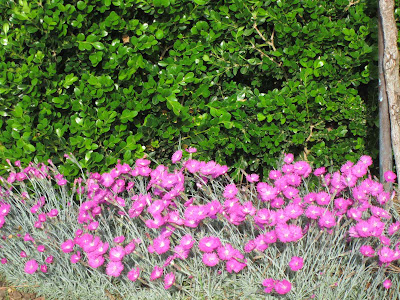 Actually, I have two areas like this.  Boxwoods form a C shape around - well, nothing now.  Before, as you can see above, I had a rose standard in the middle, with dianthus planted as a groundcover underneath.  But the standard had been going into decline for some time (the cats have been using it as a scratch post), and the dianthus was covered up with dichondra.  I found it impossible to get rid of the dichondra without pulling up the dianthus along with it.  (For those that don't know their dichondra from their dianthus, the dianthus is the pretty, pink, flowering groundcover above, while the dichondra is the low, round, creeping groundcover (weed!) below.)


So, that's what I did.  I pulled it all up.  All of it - dichondra, dianthus, and the standard, too.  And all I was left with was a blank spot.  A fresh start.  A new beginning.

I thought of another standard.  But why not do something different?

A tree?  No, that would be too tall, and too close to the house.

How about a tall, thin pot with a climbing miniature rose cascading down the sides?  I really liked this idea, and if cost were not a factor, I may have ended up with this.

But, I decided that something small would look just right (and fit in my budget, too).  Something that would surprise and delight anyone coming down the walk.  It would be a small treasure hidden inside the C-shaped boxwood hedge.  And so, I began to think about a small plant that could fit inside this boxwood treasure chest.

I have an Apricot Drift rose in another area.  I have been very impressed with this rose.  It makes me smile each time I see it blooming - which is seemingly constantly.


So, I decided upon a Sweet Drift rose here, and an Icy Drift rose in the other C-shaped boxwood area (they don't need to match, as they are not both seen at the same time). 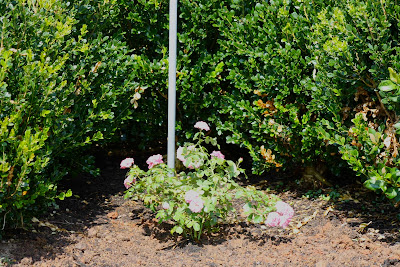 Drift Roses grow to around 2 ft tall, and spread to around 3 ft wide.  They are very disease resistant, and hardy in zones 4 through 11.  I think I'm going to like this area even better than I did before!
Posted by HolleyGarden at 8:17 AM