Well, I think my arm has been twisted enough times that I'm on the verge of yelling "UNCLE!"  Twisted pulling weeds, that is!

I looked back at my blog posts using the search tool, and every February, March, August and September, I have posted on weeding.  Weeds seem to multiply faster than I can pull them.  I once read on some forum (can't remember where) that one gardener kept his beds weed free because he weeded every Friday.  Without fail, he weeded on Fridays.  Of course, if it was raining or freezing, he didn't.  But otherwise, he weeded on Friday.

I wondered if I could do that and have a weed free garden, too.  So, I gave it a try.

Last Friday, I realized the flaw in this plan.  My garden is too big, and my weeds too numerous for me to weed them all out in one day.  At least in February, March, August, and September, I need to weed almost every day!

And so, I'm beginning to wonder if I should yell "UNCLE!" to a select number of weeds.  Could there really be that much harm? 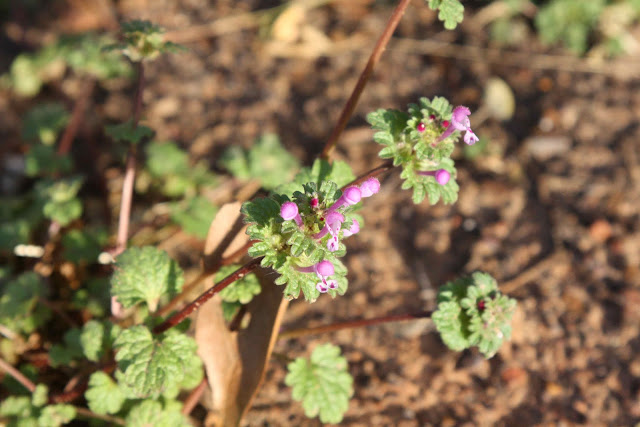 Henbit is one of the prettiest weeds in my garden.  I love its sweet little flowers - probably because they're purple.  Their lace collars give them a dainty air.

And I love how they will grow in every crack and crevice. 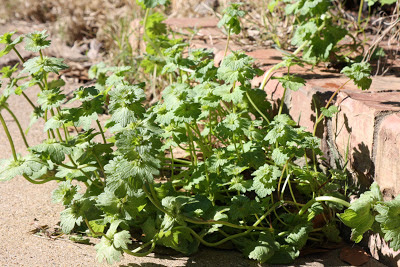 But I know better than to let this weed spread.  It would take over the entire garden if left to its own devices, so I try to pull it whenever it invades the flower beds.  (The lawn we never weed - a weed-free lawn is not important to us.)  So, as much as I like it (and it's edible, too!), I know I must weed it out of my flower beds.  I must not surrender. 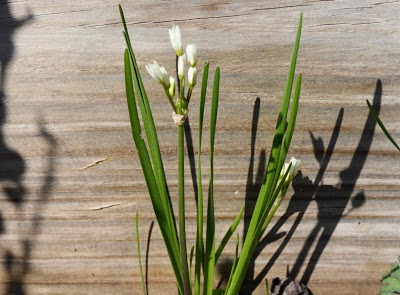 The false garlic, however, I absolutely hate to see in my garden beds.  It pops up everywhere!  It's not an easy weed to get rid of, either.  Its bulbs are deep, requiring digging instead of pulling.  I am tired of my arm being twisted from digging each and every little wild garlic bulb.  Plus, they seemingly multiply when my back's turned.  I'm considering yelling "UNCLE!" and letting it have its way. 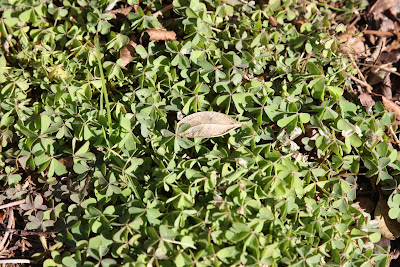 Oxalis is another invasive that I have tried to eradicate from my garden for years.  This one I'm still fighting, but as I find more and more, instead of less and less, of this weed in my garden, I'm wondering just how bad it would be if I were to let it run free.

When I first started gardening, I let one weed take over an area in the back.  I thought it was pretty, and wondered what harm could come from my letting it take over.  Well, I soon learned why this weed was considered a weed.  While it had a pretty enough flower, it also had thorns!  Ouch!  After realizing the error of my ways, I went into full-force battle mode and have almost eradicated it from my garden.  So, I know that there is a reason that common weeds are commonly considered weeds.

So, what do you think?  Should I let the false garlic stay?  How about the oxalis?  Have you ever yelled "UNCLE!" to any weed?  Did you regret it later?

Posted by HolleyGarden at 1:07 PM