Mr. Holleygarden thinks I change my garden areas often.  I think I change them slowly.


This picture was taken last October.  Look at the bottom right.  The plant there is pavonia:


This area of my garden has been full of pavonia for several years.

I love pavonia (also called rock rose).  It's easy, blooms continually in summer, even in extreme heat.  Plus, it's pretty.  But, I just never cared for it in this area.

I wanted a red and yellow color scheme in this area, and this was just too much pink.  The entire area was pink, and it always looked a bit out of place here. Still, I lived with my garden this way for a while, hoping they would grow on me.  But, I knew.  I knew the first year they just weren't right.


Then why did you buy them?

Don't ask so many questions!  You just want me to admit that that's what happens sometimes with impulse purchases!

Anyway, I got a good deal on some variegated liriope, and so I bought them.  (Yes, another impulse purchase.  I detect a pattern, but I'm not changing my impulse-buying ways!)  So, there they sat, waiting to be planted, for several weeks, with me trying to decide where I would put them.

About that same time, I started cleaning up the garden beds.


Is this going to be a long story?

As I was saying, I started cleaning up around the pavonia, and decided to thin them out just a bit.  But then I thinned them a bit more.  And a bit more.

Finally, I just pulled them all out!


Obviously, you must have had something planned for this area to pull all the plants out, right?

Of course not!  But, the variegated liriope was just sitting there, waiting patiently to be planted!  So, I used it.  And I like its bright foliage.  And, really, the poor little quince was being suffocated by the pavonia.  So it's better this way.


Are you trying to convince me, or yourself?

Probably myself, but so far, I really like it.  I think that this area now allows the eye to rest, highlighting the roses in the other portion of this bed.  I also like the variation in height.  So, I'm really liking it, so far. 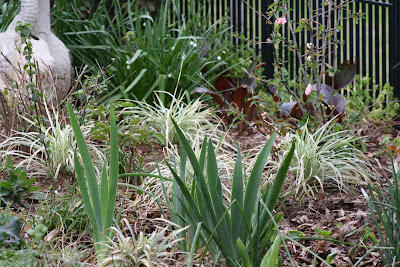 Well, I do have other things planted in there.  Irises, as you can see - I love the foliage even when they're not in bloom.  A 'Hot Lips' sage next to the birdbath, cannas (tall red ones in the back and some short yellow ones), some peonies (not sure what kind these are, but for now I'm just happy with the contrast of foliage), 'May Night salvias, a 'Mystic Spires' salvia in the back, and I've ordered some Peacock Orchids (Gladiolus murielae).  I think their tall, spiky foliage will make a nice contrast to the floppy foliage of the variegated liriope and the fat foliage of the cannas.  So, as the summer progresses, this area will continue to fill in. 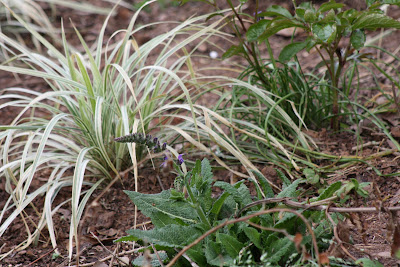 For now, at least!


Posted by HolleyGarden at 8:07 AM