My husband helps me out tremendously in the garden, but most of the flowers I consider "mine".   There is one flower, however, that he has adopted - a bougainvillea.

I had purchased the bougainvillea to be used as an annual.  Our winters are too cold for them.  But my husband noticed that I had callously left it out to die, and lovingly placed it in our garage.  Occasionally, I would look at it and just shake my head.

All winter, it looked dead.  I hate to admit it, but I was secretly hoping it actually was dead.  But, no such luck.  Instead, this past spring we noticed new growth.

I pretended not to notice.  I decided to just ignore it.

Finally, realizing that I wasn't going to help out this poor plant at all, my husband decided to water it.  Eventually he moved it from the garage to the driveway, where it could get some sun.

I continued to ignore it.  So, Mr. Holleygarden continued to care for it, splashing it with water occasionally and marveling at the bougainvillea's growth. 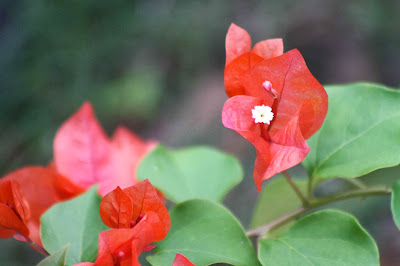 Yep, right there in the driveway.

Now that the weather has turned colder, guess where the bougainvillea is?  You got it!  Mr. Holleygarden has put "his flower" back in the garage for the winter.

Obviously, bougainvilleas are not hard to overwinter in a garage.  Even an amateur gardener (or a husband) can do it.


Posted by HolleyGarden at 6:25 AM