I was thrilled.  The airline didn't bump me.  The flight was on time (early, actually).  And my luggage was not lost.

And when I looked down from the plane's window, I loved what I saw: green, green, and more green.  There were green trees everywhere.  It was just beautiful.  And while it was too early for a full fall foliage display, I didn't care.  I was going on a Presidential Gardens Tour!

In the end, I was pleased to visit three gardens of previous Presidents.  Can you guess where I was?

Just a little advice: Do NOT type in Montpelier into your gps tracking device, or google maps, expecting them to know it as a point of interest.  Both of them will take you to the town of Montpelier, VA, an hour away from your intended destination.  Unfortunately, I learned that the hard way.

And if you are planning your own Presidential Gardens Tour, George Washington's Mount Vernon is just a few hour's drive from Charlottesville (near Alexandria, VA).  But due to time constraints and complications with traffic congestion, my plans to visit it were spoiled.

I'll just have to plan another trip!

Here are just a few of my vacation pictures from Monticello, Ashlawn-Highland, and Montpelier.  We'll start with the home of the third President of the United States, Thomas Jefferson's Monticello:


See that pathway in the picture above?  This was a circular pathway lined with flowers on both sides.  I could imagine walking along this path every morning, and maybe I'll be able to incorporate this design somewhere in my own garden. 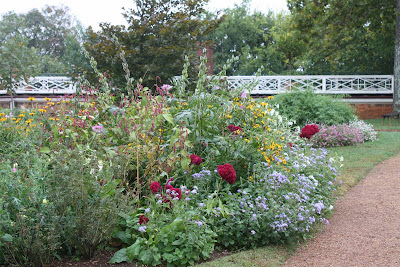 This is just one of the groups of flowers lining the pathways.  So many different varieties of flowers all placed together!  And the plantings were different in each grouping.  In addition, they were planted very densely.  So, while not everything in the groupings were blooming at the same time, it had the feel that the entire group was blooming because they were planted so closely together.

But I was most impressed with the vegetable garden: 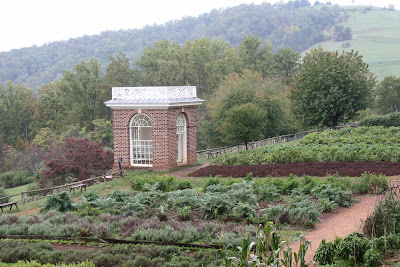 So different from my weed-filled vegetable garden!  Some things had just been planted.  Their little leaves were just beginning to pop up through the soil.  And some things were ready to be harvested.  I felt quite inadequate as a vegetable gardener here! 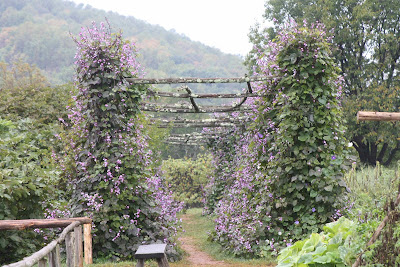 Above is another area of the vegetable garden.  There were a few pods, but most of these peas were in flower.  Morning glories and other climbing flowers were planted along with them.  It was just beautiful. 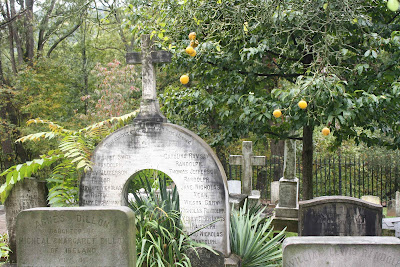 Instead of taking the shuttle bus down the hill, we walked.  About halfway down is the graveyard.  I loved this unusual headstone, and think it looks especially lovely with the lush plantings around it.


Just around the corner is the home of the fifth President of the United States, James Monroe's Ashlawn-Highland:

Ashlawn-Highland was a small house, but the grounds were beautiful.  The approach to the house was lined with ash trees.  Oh, how I wish I had a winding road leading to my home.  I would love to have it lined with trees like this.  Simply gorgeous. 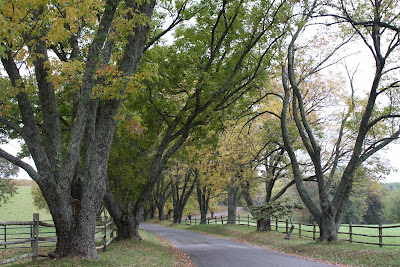 They also had a beautiful vegetable garden (shown below), and a small kitchen garden with numerous herbs and a fig tree right outside the kitchen doorway.  I am determined to have a much less weedy vegetable garden next year!  I especially loved how they had beautiful ornamental plantings outside the vegetable garden.  There was even a climbing rose bowing over the picket fence.   You know I found that charming! 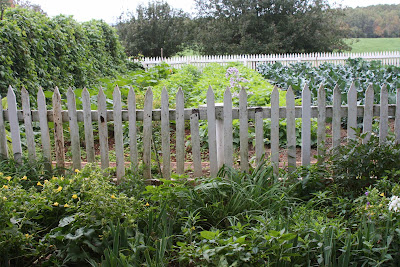 According to our guide, the tree below was over 300 years old!  This wasn't the only tree that commanded attention.  There were several areas where large and beautiful trees were featured.  Note to self: plant more trees! 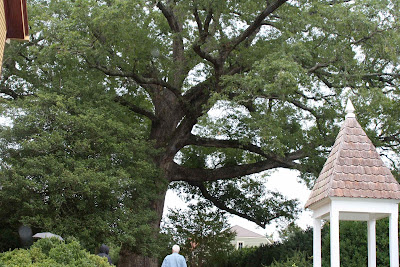 Check out the free-range chicken in the background of the picture below!  haha - The rooster was trying so very hard to keep his "girls" in line, but they seemed to be ignoring him!  In addition to chickens, there are also peacocks that wander the grounds. 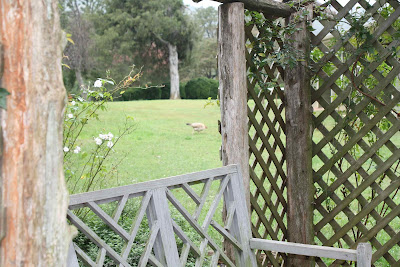 While this garden was smaller than Monticello's, it had a uniquely enjoyable personality.

Home to the fourth President of the United States, James Madison's Montpelier (in Orange, VA!) was the final home we visited.

The Annie duPont Formal Garden was lovely (the duPont family owned Montpelier for many years).  It doesn't look large when you first step into this garden, but as you begin to find little areas tucked away, it begins to dawn on you just how large this garden actually is! 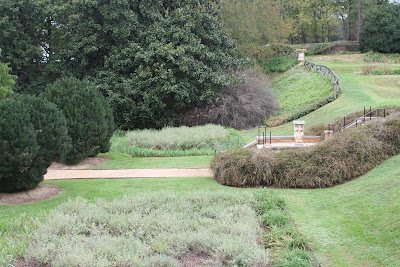 This above view is just one small area looking across the garden.  A hedge lined most of the straight walk through the middle of the garden, but wander around, and you will realize that there is much more about this garden than just what you can see from the main path.  Hidden on either side are lovely plantings, several benches, secret pathways, and even a rustic bridge.

It was fun discovering these little secret areas.  See the bench in the picture below? 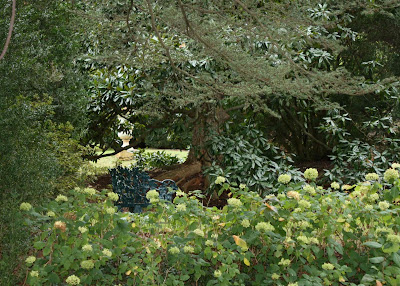 Besides this particular garden, there was much more to discover here, including hands-on demonstrations, and a forested walk. 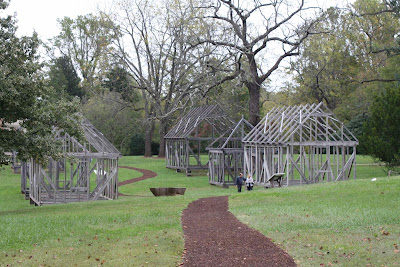 Next to the house are the model slave quarters (above).  Before going to Virginia, I read 'Founding Gardeners', the book reviewed by Dorothy of Soil Sister of the San Joaquin.  I am so thankful that Dorothy brought this book to my attention.  It made the founding fathers come to life for me, and I noticed things in these gardens that my eye would not have caught before.  These slave quarters are just one of the many things discussed in the book. 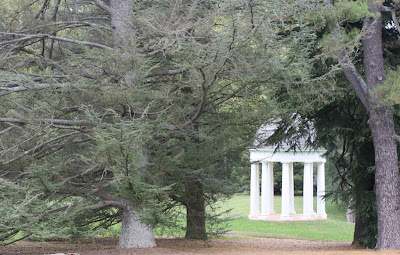 This temple located on the grounds is also discussed in the book.  It sits over a well which was used as an ice house, keeping the temple cool, and allowing them to serve iced drinks and even ice cream during the summer - a rare treat back then!


Each of the gardens were uniquely wonderful.  Famous and beautiful, you could see the love of gardening that Thomas Jefferson had at Monticello.  James Monroe's Ashlawn-Highland had gorgeous views and lovely garden areas.  And James Madison's Montpelier was quite impressive with its numerous trees and rolling hills.  I recommend touring all three!

Have you had the opportunity to tour these gardens?

Posted by HolleyGarden at 6:04 AM