When we first moved into this house, I asked Mr. Holleygarden to string wire up along the porch columns and across the top of the porch.  I planted moonflower vines (Ipomoea alba) that twined and grew up the wires, draping the porch in a romantic curtain of heart-shaped leaves and large white blooms.  It was that year that I saw my very first hummingbird moth.  It was extending its long tongue into one of these large flowers, and at first I thought it was a hummingbird.  I was mesmerized, and watched it for a long time.

But when winter hit that year, the vines died, and I became frustrated with climbing a ladder in order to remove the brown, crispy vines from the wires.  I asked Mr. Holleygarden to remove the wires, which he dutifully did, and I didn't plant moonflower vines the next year.

But, even though I have promised Mr. Holleygarden that I'm almost positive that I probably won't want him to remove the wires again, he has not been keen on putting the wires back up.  Even a man as patient as he has his limits!

Of course, I could put up the wires myself, and actually I have all the supplies.  It it on my To-Do list.  Actually, it has been on my To-Do list for the past several years.  But I'm really not sure I'll want them there permanently, and I don't want to have to take the wires down once I've put them up!  (I and Mr. Holleygarden think alike on that.)

Anyway, this year I have been growing moonflower vines on the obelisks in the East bed. 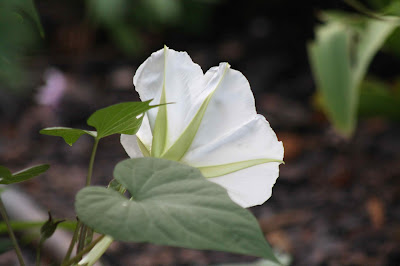 They are so pretty!  Heart shaped leaves, and a star in each bloom.  And the flowers are HUGE!  (In reality, about 5 to 6 inches across.) 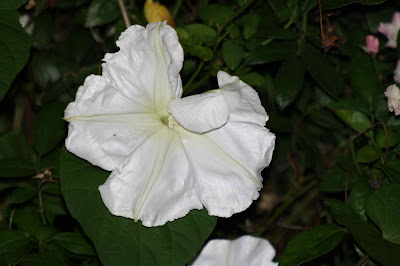 Moonflowers open at night, and they really do shine in the moon light.  They would be a perfect choice for a moon garden.  (I can see them from my bedroom - the perfect spot for a night-opening flower.) 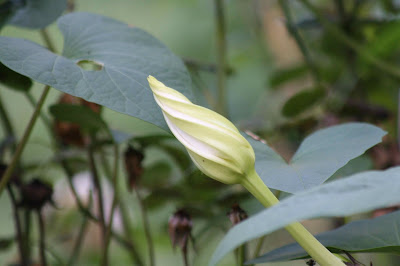 Before they open, they look like swirls of ice cream.  Here, they reseed a little, but nothing like the morning glories, which are quite invasive.  (Your area may be different.)  And the seeds are very easy to save.  (I soak my seeds in water for 24 hours before planting, and they usually all come up.)

They are not only taking over the obelisks, but the entire bed! 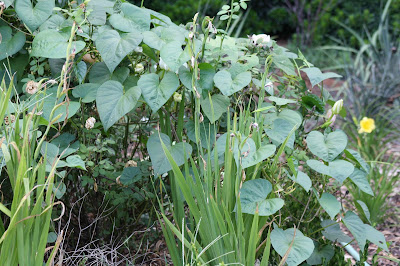 I'll be spending the day cutting back the moonflower vines so my roses can breathe. 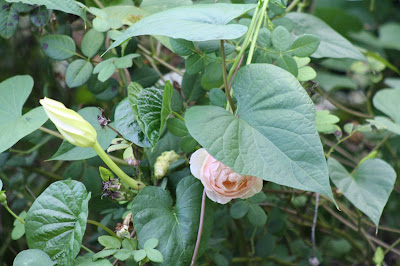 I don't think I'll plant moonflower vines on these obelisks next year!

Hmm... I guess the hardest part about growing moonflower vines is figuring out where to put them!

Posted by HolleyGarden at 6:28 AM