Every day, I would walk down to the vegetable garden and take a look.  And one thing was worrisome to me.  I wondered what was wrong.  I'd never seen anything like it.

The cucumbers were growing on the vine.  The vine was full of them.  Growing, getting larger, but there was a problem.  They were white.  I had never seen a white cucumber.  Very odd.

And so, I wondered.  Were they getting plenty of sun?  Perhaps that was why they were light in color.  But, no, they were in full sun.  That couldn't be the explanation.  Were they just immature?  I know cucumbers start out green, and stay that way.  Again, that wasn't it.

Still I wondered.  Were they rotten?  No, I felt of them - their little white skins were firm.  No holes, no bugs.

I didn't want to disappoint Mr. Holleygarden.  He has been so proud of his garden.  And yet - the cucumbers were white!

Then one day, he accused me of not paying attention.  "There are a lot of cucumbers out there - and they're growing too big!  Why haven't you started picking them?"

"Because they're white!  I don't know what's wrong with them!"

He rolled his eyes at me.  This is a bad habit most of my family members have.  And they seem to direct this malady in my direction most of the time.

In a totally disgusted voice, he said flatly.  "They're supposed to be white.  They're heirlooms.  They're called White Wonders."

Well, that explains a lot! 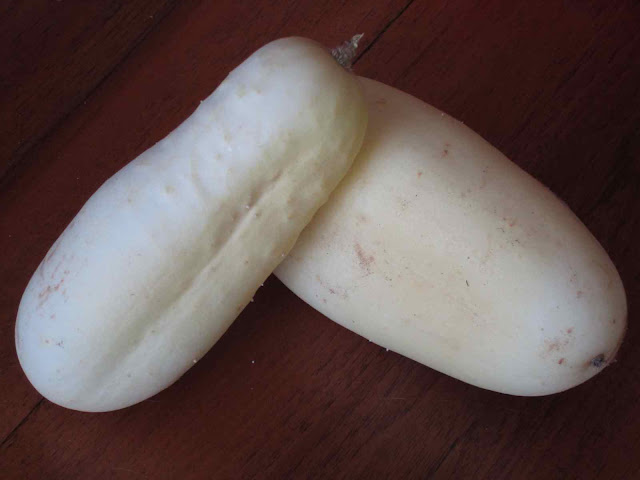 And now that I don't have to wonder any more, I am amazed at the cucumbers.  They are delicious.  And producing quite a bit.  They really are a white wonder!

Have you ever heard of White Wonders?  Have you ever grown a white cucumber?
Posted by HolleyGarden at 3:33 PM