What was of interest to me was the garden center attached to the home repair store!  Cyclamens, pansies, and nandinas, however, didn't hold my attention.  I already have all those. 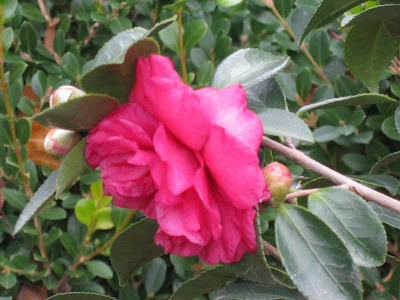 But, I knew exactly where to put one!  I am removing two 'Blushing Bride' hydrangeas that have disappointed me from day one.  They have been in that spot for three or four years, and they barely put out one bloom per year.  They are never happy there, and I'm not sure if it's them or their home.  So, they will be moved (and given another chance) to where the gardenias are struggling.  And the gardenias will be moved somewhere - I'm not sure where.  But, that doesn't matter.

What matters is I have a place to put this camellia!  So, of course I need it!  :)

Actually, I would have passed it by except for one thing that was right above its bloom - a 50% off sign! That sealed the deal.  I'm a sucker for a plant sale!

And my "winter bed" has a new winter blooming plant!

By the way, in case you're wondering, Green's Blue really isn't blue.  Most flowers called blue are really kind of tinged purple.  If they're called purple, chances are they're really a dull, not bright, pink.  I really don't think most gardeners are color blind.  I think it has to do mostly with marketing.

So, Green's Blue is pink.  Maybe a purply-pink.  Whatever.  It was 50% off and that's what really mattered!

Is it hard for you to pass up plants on sale, too?
Posted by HolleyGarden at 8:17 AM