My red dianthus has been stunning this year. 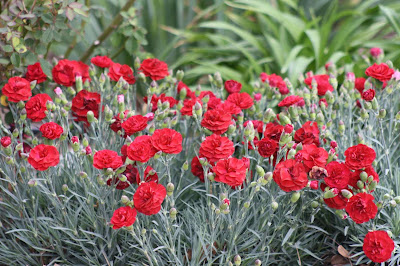 Last year it was stunning, too.  Even more so, really.

Because last year there were Thalia daffodils blooming alongside them.  It was magical.  And I looked forward to seeing that same look again this year. 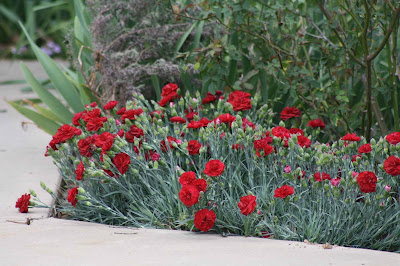 But the daffodils have all bloomed and gone this year.  But not one Thalia bloomed.

So, I decided not to ever, never, never ever, to plant Thalia daffodil bulbs again.

Even if I did think it was so charming blooming alongside the red dianthus.


That's when I remembered - it might have actually been my fault.  Oops!

Anyway, I decided I was going to deadhead the dianthus, even though usually I just let them lie there dead and ugly.  While I was tidying up the dianthus, I'm afraid I might have also tidied up the daffodil foliage as well.  I kind of, sort of, remember doing something like that, maybe.  (Confession is hard.)

Anyway, that's a big no-no.  I know better.  I faintly remember not knowing what that ratty foliage was when I cut it down.  I should have taken the time to remember it was the daffodils.

Daffodils need to keep their foliage as it's dying down, to put the energy back into the bulb for blooming.  Otherwise, they don't bloom.

My bad.
Posted by HolleyGarden at 6:57 AM