The Secret to Growing Ajuga in Texas

Ajuga.  Bugleweed.  Carpetweed.  Sounds like a weed!  Certainly doesn't sound hard to grow, does it?  When you read about ajuga, it is usually paired with the words "easy to grow", "naturalizes", and "groundcover".  Grows in zones 3 through 9, with average water needs.  Sun to part shade.  It is even sometimes labeled as invasive!

Sounds so easy to grow.  Well, my experience is different.


I first planted ajuga several years ago, in full sun.  They lived for a while, but never really took off.  Finally, they died.  Probably didn't get enough water that year.

Then, I put them where they received only morning sun.  I thought they would be so happy there.  But , the same thing happened.  Just never took off.  Finally, they died.  Probably didn't get enough water that year, either.

One last try.  I even wondered myself why I was trying again.  But, buy them I did.  And I placed them here and there in my garden.

Just as I figured, most of the ones I checked on have been doing nothing.  Still alive, but just not taking off.  I expect eventually they will die. 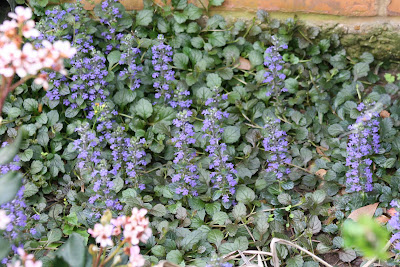 I found this patch of ajuga!  They were not only thriving, but they were actually multiplying!  Putting out runners!  Becoming a true patch!  Just like they're supposed to do.

What is different about this ajuga from all the other ajugas in my garden?

Where it is planted. 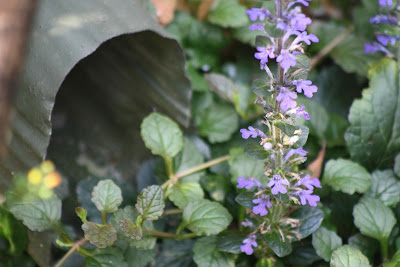 This ajuga is planted where it gets the runoff water from the gutters.  So, it stays constantly moist.

How about you?  Do you grow ajuga?
Posted by HolleyGarden at 9:28 AM