My sister loves to take shortcuts.  No matter where she is driving, she knows a shortcut.  Sometimes she knows so many shortcuts, I think it takes us longer to get there than if we had just gone the regular route.

Well, that's kind of what happened to me.  I tried to take a shortcut, and in this instance it worked, but it's not the advised way to go.

You see, when I started gardening, I realized that nothing would live in our soil.  It was pure clay.  Brick almost.  What's a girl to do?  Amend is the regular route.  But I wanted a shortcut. 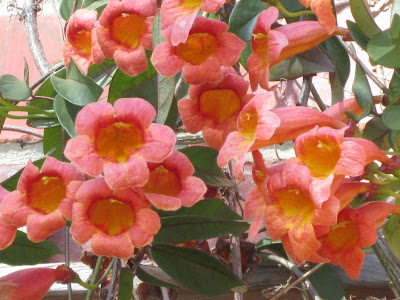 I really knew nothing about my crossvine (Bignonia capreolata) when I bought it, except it was a plant native to many southern states, including Texas.  It seemed to me that native plants that might grow in the naturally hard soil.  And I could skip a step.

Except for a few areas (which still includes where this vine is planted), my soil is nicely amended now.  But it took a long time to get it that way.  And miraculously, the crossvine turned out to be a beautiful shortcut.


If you want to try a crossvine, here's some thing you might want to know: 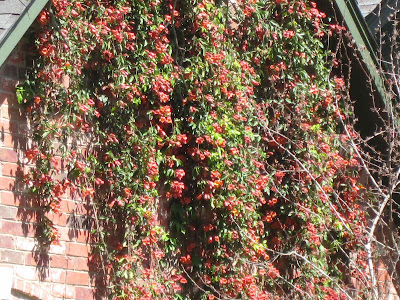 Mine is allowed to just grow and hang down upon itself.  As it takes pruning easily, I've seen others train their crossvine neatly across their house, up an arbor, draping a gazebo, across the top of a fence, or climbing a tree.  It is said if you cut into the stem, you can see a cross sign, thus the name crossvine.
Versatile.  Tough.  Attracts hummingbirds.  Evergreen.  Easy.  An orange spectacle when it blooms.  My shortcut.
Posted by HolleyGarden at 1:57 PM