I walked outside the back door, and suddenly stopped.  I smelled something.  Something sweet, but with a tang.  Where was it coming from?

Trying to figure it out, I tried to remember which blooms' scent I had noticed lately.  It couldn't be the daffodils that had enchanted me with their fragrance just yesterday - they were planted in a different bed.  Slowly, my gaze moved along the garden, eliminating each plant.  Not the lamb's ear, not dianthus.  The irises were in mid-bloom - some had finished blooming, others had not started.  The roses hadn't started blooming yet.  Same with the cannas.  The lilies were starting to come up, but no blooms on them either.  This was getting mysterious!

Finally, I realized.  It was the hollies! 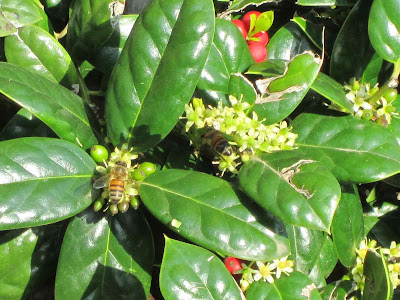 Normally, holly bushes get all their attention in the winter.

But right now, my holly bushes are getting all the attention they could ever want from multiple pollinators.  It was amazing to see not only bees, but flies, wasps, crane flies, and many other different flying insects being attracted to their strong perfume. 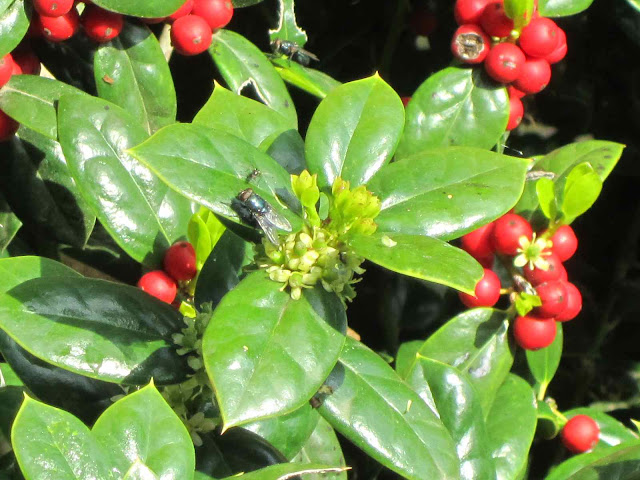 These holly bushes are Dwarf Burford hollies (Ilex cornuta 'Dwarf Burford').  I have clipped them into different shapes over the years as they grew - starting with a ball, then a pyramid, then a cube.  Now they are too tall for me to reach the tops, so they are clipped as a cube on the bottom, with the top having a bad hair day - sticking up and about every which way.  (Uh, yes, that's done on purpose!) 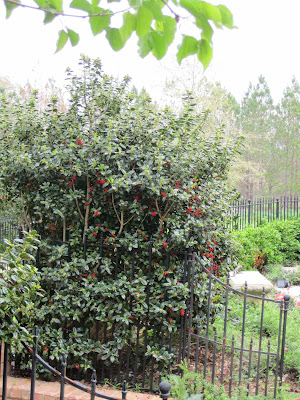 Dwarf Burford hollies grow in zones 7 to 9, up to 8 ft tall and wide.  Mostly grown as a hedge, but I've also seen them attractively limbed up as small trees.

Hollies are great plants to have for winter interest.  But as I realized today, that's not the only time these plants are interesting.  Pollinators love them in spring.  And their scent fills the air.
Posted by HolleyGarden at 5:48 PM