I planted some 'Stargazer' lilies in my garden last year.  They were a fun surprise to see in the garden when they bloomed.  A beautiful, cheerful pink, with dots and frills.  I fell in love. 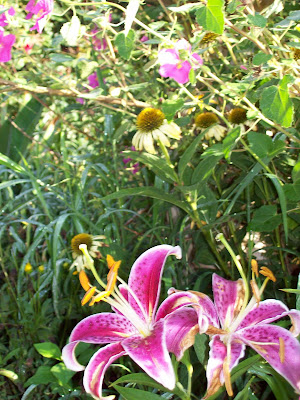 (Lilies from last year)
Filled with confidence, I ordered more lilies.  Some pink, some white, and a few more 'Stargazers'.  So, imagine my surprise when my lilies began to open and this is what they looked like: 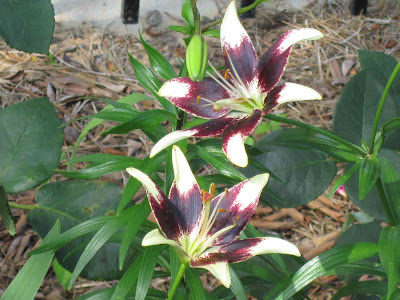 Hmmm..... they don't look pink.  Definitely not white, and they're not 'Stargazers', either.  Frantically, I started trying to figure out this mystery.
Was I sent the the wrong lilies by mistake?  I went to the vendor's website where I had ordered the lilies, and determined that it looks a lot like Lily 'Cappuccino'.   A mix-up in my order sounds plausible.  Well, I decided, I must have received the wrong lily by mistake!  As pretty as they are, they are probably not something I would have picked out.  I didn't order this....did I? 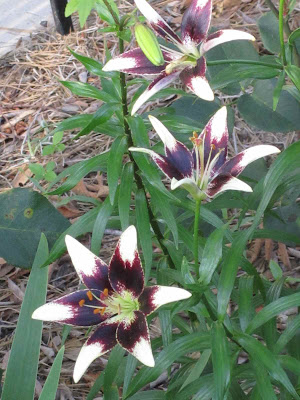 Maybe it's not a mistake.  Maybe I actually purchased this lily.  Was that the only order of lilies I placed this year?  I began to thumb through my plant tags in a final effort to positively identify this mysterious interloper.
And there it was.
One bag of lilies picked up on impulse.  They were only marked as "Oriental Lily mixed".  Hmmm..... Lily 'Cappuccino' is supposedly an Asiatic hybrid lily, not an Oriental.   So, perhaps they're a different lily.  But, still, they look like 'Cappuccino'.  So, maybe they're not from my impulse purchase mixed lily bag!  Which leads me back to a mix-up in my order. 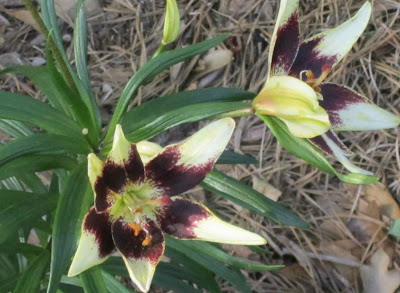 It became clear I will never figure this out.  I don't know if they are from the 'mixed' bag, or from a mix-up.  I just have to admit - I don't know who they are!  :(  I hate that!
Do you like to know the names of "everyone" in your garden?
Posted by HolleyGarden at 7:07 AM