What Was I Thinking?

This is a tale of woe.  A lesson learned.  A big mistake.  "They" (who are these "they" anyway?) say the best lessons come from experience.  Well, I've just learned a big lesson!

My lesson comes from radishes.  Yes, those seemingly innocent vegetables that are a tasty and delightful addition to a salad.  And when radishes give you a lesson, it's not subtle! 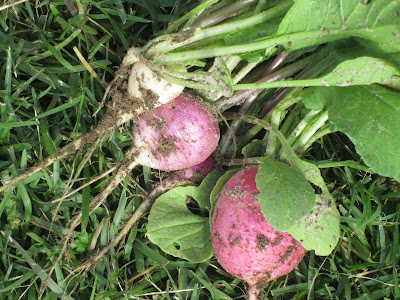 I planted radishes this past spring.  They were quite productive.  But the timing was a bit off.  They ripened  well before the lettuce did, so I realized that I needed to actually read the dates that are listed on the back of the seed packages to coordinate the ripening of the lettuces and the radishes at the same time.

So, that was a little lesson, but not the big one! 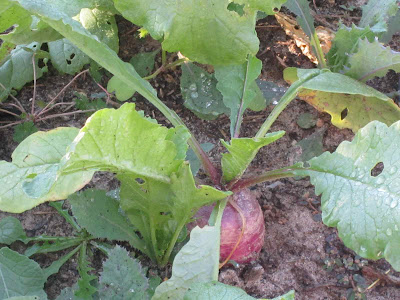 You see, since my lettuces weren't ripe at the same time my radishes were, I left the radishes in the ground.  I wanted to learn how to gather seeds anyway, so I just let the radishes go.  And go they did!


Yes, I did get radish seeds.  But I got something else that I wasn't expecting!


The radish plants that I let go to seed did just that.  They went to seed and seeded themselves all over my vegetable garden!  They are completely taking over!  I never dreamed I would have mutinous vegetables!

So, now I'm pulling radishes, eating them as fast as I can - raw, steamed, baked, microwaved, you name it - before they crowd out everything else in the garden.  And certainly before any of them go to seed again!  This is one mistake I don't want to repeat!
Posted by HolleyGarden at 7:36 AM