Death of a Salesman

Like most gardeners, I have learned to save the tags from plants in order to have the latin name.  This is the only way to guarantee you will get the exact same plant, as there as many varieties of some plants, should you want to purchase more.  So, it was a bit frustrating to me when I purchased a plant just labeled "Rock Rose."  I looked at page after page of different "Rock Roses", but none looked exactly like mine. 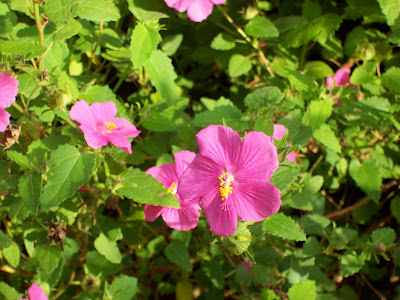 So, it was with excitement and delight that I spotted my "Rock Rose" from afar at a local Lowe's.  I ran over to the display in order to steal the tag make note of the latin name.  I couldn't believe my eyes when I gingerly raised the tag to read the name, and the label said only:


I wondered if the supplier was a small operation, or if they, too, were unsure of the latin name.  As I was cursing them under my breath pondering these questions, I realized there was a lady standing close to me.

Being the helpful gardener that I am, I launched excitedly into the fine attributes of this plant that I have come to love:
1) Easy to grow.
2) Drought tolerant.
3) Grows to around 3 ft. tall.
4) Blooms in the summer heat when other plants go dormant.
5) Spreads easily, but not aggressively, and the seedlings are easily removed.

Not wanting her to think I was employed by the stupid supplier, I also told her about its fault:
1) The blooms close at times.  Almost like a reverse four o'clock, the blooms close in the heat of the day, but are a wonderful open bloom to wake up to in the garden. 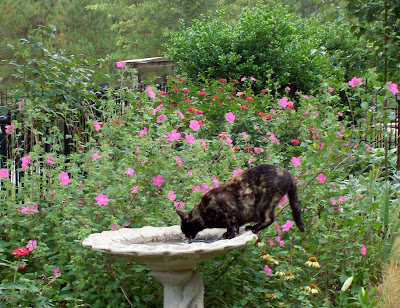 After my helpful comments, I realized that she was looking at me like a serial killer in an odd way, and I felt it was time for me to venture closer to the boring boxwoods, where no one would need my helpful commentary.  As I continued to watch her I saw her leaving the garden center in what seemed to be a hurry, BUT (and this is where you should pay attention)

Back to my story - BUT BUT BUT!!!  She left without the Rock Rose!!!  After I had told that old biddy her that it would do well in her garden!  I felt a little rejected, and decided I would try hard to not talk anyone else into a plant for their garden.

But YOU!  You might want this fine plant in your garden!  I highly recommend it, if you find it for sale.  It's sometimes sold with a tag that does not list its latin name.

BUT - (and you know what to do now) On my last shopping spree visit to the Lowe's garden center, I was delighted to see Rock Rose for sale - and this time the Latin name was on the tag!  Yes, I stole a tag for my records.  Pavonia lasiopetala is this wonderful plant's latin name.  It grows in zones 8 through 11.  Be on the lookout for it!  And for helpful gardeners.  :)
Posted by HolleyGarden at 10:03 AM