My 'Professor Charles Sargent' Camellia has finally decided to bloom!  I have been waiting all winter.  All winter I have watched, and waited.  I even posted about its almost-open bloom two weeks ago!  After waiting all that time, and realizing that spring was upon us, I gave up on the Professor.  My thoughts turned to daffodils.


March 1st.  Not even technically winter, at least not in Texas.  I feel like writing it a warning.  "Bloom earlier next year."  Except, I have no 'or else' at the end of that threat.  I love it too much! 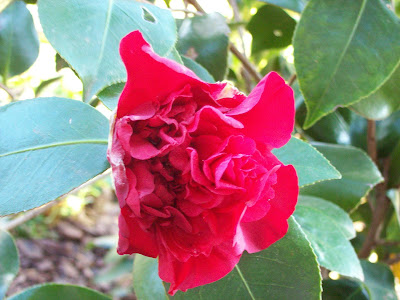 The Professor was a gift in 2009, so I don't have a history with it.  And I know he's a japonica, which blooms later than sasanquas.  But everything I've read says the Professor is supposed to bloom in winter, right around Christmas.  Well, I don't know if the Professor realizes he's late this year, but he's in good company - another Professor down the street is just now beginning to bloom, too. 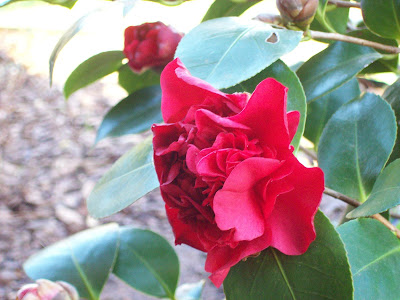 And although I'm a bit disappointed he didn't bloom at Christmas, I am just thrilled to see his blooms opening.  And amazed at the number of buds that are just now awakening.   I will still cherish him as a spring bloomer, if that is how he wants to behave.

If you have a 'Professor Charles Sargent' camellia, when does yours bloom?
Posted by HolleyGarden at 7:21 AM