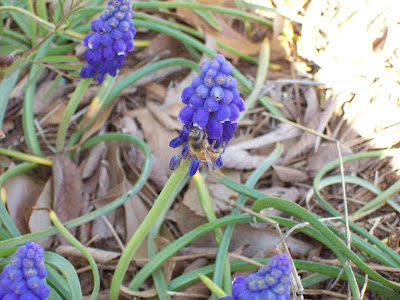 My maternal grandfather used to keep bees.  He would collect the honey and save it in jars.  The jars were kept in an outside storage shed, nicknamed "the honey house".  There was always a jar of honey sitting on the breakfast table, and I assumed jars were given away as gifts, or sold if times were tough.  Years after his death, the house was sold.  Cleaning out the honey house, we found shelves still filled with amber jars of honey.  It was like finding lost treasure. 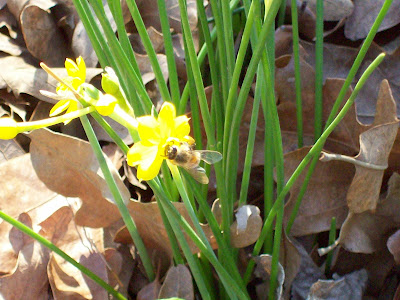 I always felt a little guilty eating the honey.  I felt sorry for the poor worker bees that used their short lives gathering nectar (most worker bees only live to around 35 days old), only to have their life's work stolen by some strange man clothed in an even stranger white suit.  I did not know that the worker bee actually works herself to death - her wings get frayed and she is rejected by the hive.  But I knew that gathering the honey didn't hurt the bees.  And I knew that what my grandfather did was interesting to most, enviable by some. 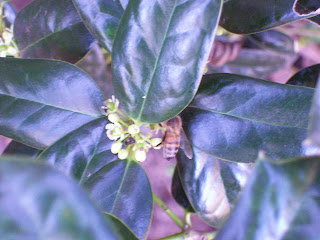 The worker bee is appropriately named.  She goes from flower to flower collecting nectar (liquid) (remember getting nectar from honeysuckle as a kid?) and pollen (dry particles).  The pollen gets passed from flower to flower, helping fertilize plants to produce seeds (or, the fruit of the plant, which holds seeds).  The nectar gets stored in a special sack.  When the sack gets full, weighing almost as much as the worker bee herself, she flies to the hive and transfers the nectar to another bee, mouth to mouth.  This nectar is used to produce honey in the hive. Worker bees also have a special undercoating on their abdomen which produces beeswax.  What a multi-tasker! 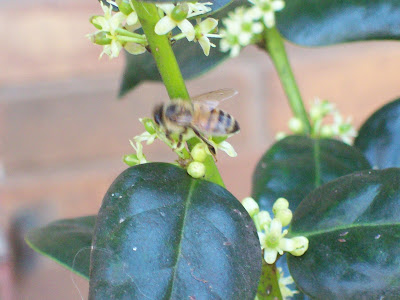 Gardeners are very much interested in bees.  The reports of declining numbers of bees are alarming, and researchers are working hard to find the cause.  If you understand the  importance of bees on the production of food, you begin to have great respect for the bee - and not just for its sting!  Before we decided on this house, we looked at a number of homes to purchase.  One house, though not exactly what we were looking for, stood out.  The owner of the house kept bees.  The bee boxes and all his equipment were to be sold along with the house.  I often wonder what happened to those bees.
Posted by HolleyGarden at 8:51 AM