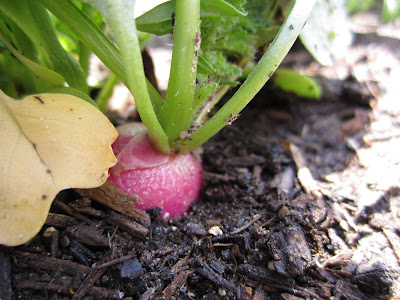 I was watering my vegetable patch (yes, we are already watering things around here), when I decided to do something bold.  And I'm glad I did!

For those of you that are interested, according to Dallas' Channel 8 WFAA chief meteorologist, Pete Delkus, we have officially received .1 inches of rain in the month of March.  The lowest rainfall on record for March was in 1925, when we received .2 inches of rain during that month.  So, if we don't get some rain soon, we may be back to the start of another dust bowl! 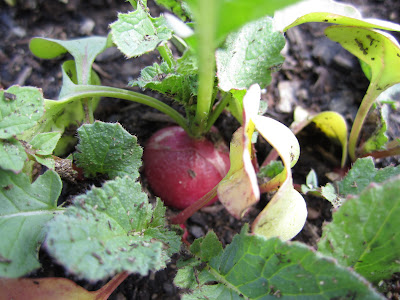 Anyway, back to my story.  I was watering my vegetable patch and I noticed how pretty the red radishes were just barely peeking up out of the ground.  The contrast of the green leaves with that bright red of the radish was beautiful to me.  Not only the color contrast, but the fact that the radish seeds were actually growing to be radishes!  Last year my radishes did poorly.  This year - they look great! 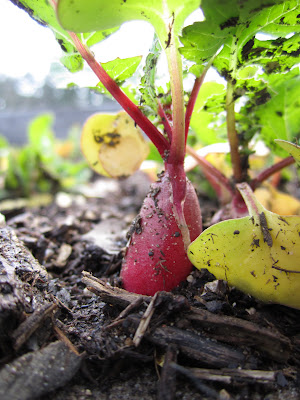 So, I boldly reached down, and harvested one.  Removing the roots and the top, I made a quick decision.  I popped it into my mouth - dirt and all.  Now, there wasn't much dirt, really.  And I, like most home gardeners these days (I think), garden organically.  I figured farmers have been testing their vegetables without washing them first for years.

The radish tasted splendidly.  (No dirt taste, really!)  Sweet, with just a little bit of bite at the end, but not too hot.  It was a 'Sparkler' variety.  Yum. 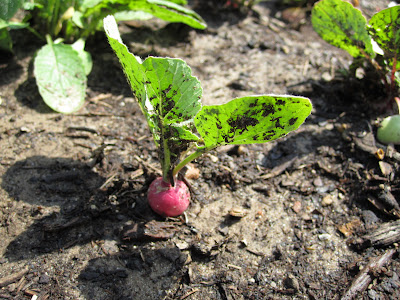 Have you tasted the first bite out of your garden yet this year?
Posted by HolleyGarden at 4:57 PM