After all that lamenting about my azalea envy, I realized I do have one azalea that's thriving!  I always forget it's an azalea, though, because it doesn't really look like one.  Read on.

You see, I was intrigued by the yellow azaleas growing in a yard on the Azalea Trail in Tyler.  It was unlike any azalea I had ever seen.  In fact, I thought it was some sort of bush honeysuckle, because it looked like honeysuckle and that is how it smelled!  Fabulous scent!  I had to have it.  I tracked down the owner and asked him about this plant. 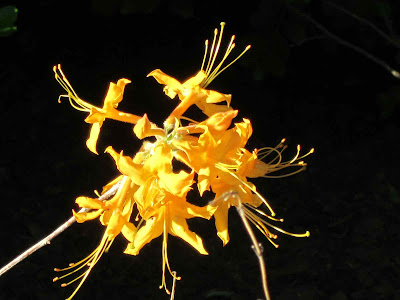 "It's a native American azalea", he said.  He even had a book on this type of azalea.   There was a supplier that had these azaleas, but they were off the beaten track.  So much so, I had never heard of this supplier, nor sure which road would lead to it.  Still, I was up for an adventure.

But first, we had to do errands.  Traveling to Athens, Texas, for some of them, we needed to stop at a hardware store.  The Ace Hardware was off the main street, so that was where we decided to go.  And, much to my delight, they had plants in the parking lot.  I decided to browse. 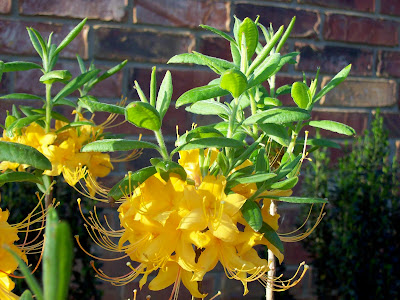 Can you believe it?  They had those azaleas - obviously the supplier was trying to increase its sales.  I considered getting several, but I decided I'd better stick with just one, since I don't have a good track record with azaleas.

Not only does this azalea look different, it is different.  First, it is deciduous.  Secondly, it has grown and bloomed for me (a miracle, given my azalea history!).  Everyone that sees it in bloom asks what it is.  They think it's a honeysuckle because of the scent, just like I did. 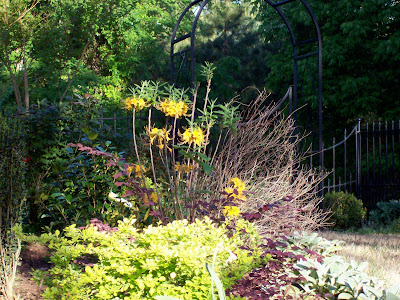 According to the Azalea Society of America, there are 17 species of native azaleas.  They have information on them all, including a quiz of identifying characteristics.  Based on that, I believe my azalea to be Rhododendron austrinum.  Commonly called Florida azalea, it is native to Florida, Georgia and Alabama.  It grows in zones 6 through 9.

This azalea withstands heat and drought better than most azaleas.  Perhaps that's why I'm having success with it!  I hope you will try one of these. You may not remember it's an azalea, but you will not be disappointed.  If you can find one.  Don't forget to check the local hardware store!
Posted by HolleyGarden at 2:47 PM

Email ThisBlogThis!Share to TwitterShare to FacebookShare to Pinterest
Labels: Other Plants and Flowers, Try This at Home