What blooms in winter?

If you are in the right zone for growing camellias, you should give them a try.  I received a couple of camellias as gifts in 2009; since then my camellia obsession has grown.  There are two main classes of camellias - japonicas and sasquanas.  Generally (which means there will be exceptions), japonicas need more shade, sasquanas can handle more sun; japonicas bloom later in the season (Jan - March), sasquanas bloom earlier (Oct - Dec).

Handle camellias with care.  They hate their roots to be disturbed, so transplant with some delicacy.  They also love nice, rich soil.  Something that is hard to come by around here.  I have two 'Yuletide' camellias that died this year.  I could blame it on the hard clay they were planted in.  But in reality, one was blown over by a wind storm; while replanting it, I damaged its roots.  The other split in two.  Probably from a jumping animal - most likely cats, but it could have even been an armadillo or raccoon that did the damage.

Either way, I will replace both camellias.  Camellias love to be placed under deciduous trees.  That way, in the summer when the temperature is high, they get shade; in the winter when the temperature is low they get the warming rays of the sun.  I had some roses originally in this spot.  But the tree nearby grew, as trees will do, and shaded the roses a little too much.  They survived, but bloomed little and grew leggy.  So, I've transplanted the roses to a sunnier spot.  The camellias should do beautifully there with some enriched soil.  Provided I can keep the animals off them! 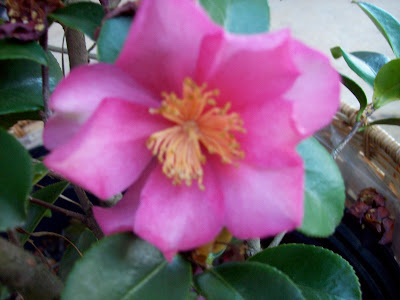 Posted by HolleyGarden at 7:44 AM