Try this at Home!

Ilex Comuta 'Bufordii Nana', or known as Dwarf Buford Holly.  A great plant for hedges.  Especially beautiful as a 'wall of green' behind rose bushes if you have the room. 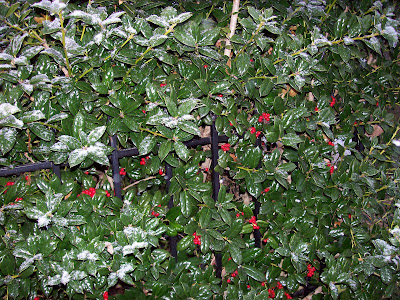 You can shear Dwarf Buford Holly if you like, which is how I like to see it used.  Because of the sharp needles, be sure it is placed in a position far enough away from traffic where that won't be a problem.  There are many, many cultivars of 'Ilex'.  Some are deciduous, some are evergreen.  Dwarf Buford Holly is evergreen with red berries in the fall.  It does flower in the spring (flowers are not noticeable) and will attract bees.  May not be reliably hardy in northern zones.

Dwarf Buford Holly is one tough plant.  Very drought resistant when established.  Be certain you place it where you want it permanently.  Once established, it is the dickens to remove!

If you are contemplating an evergreen hedge with little maintenance, consider Dwarf Buford Holly.  Yes, you can try this at home!
Posted by HolleyGarden at 8:47 AM

Email ThisBlogThis!Share to TwitterShare to FacebookShare to Pinterest
Labels: Other Plants and Flowers, Try This at Home